5 GI Symptoms No Woman Should Ignore

When it comes to gastrointestinal (GI) conditions, symptoms can be as mild as a nagging stomach ache, or as serious as a sharp pain that lasts all day.

But how do you know if your symptoms are serious?

“Any symptom that lasts more than a few weeks, or causes interruptions in sleep or your daily schedule should not be ignored,” says Farzana Rashid, MD, gastroenterologist at Penn Medicine Radnor. “However, there are several symptoms that should never be ignored, as they could be the sign of a more serious problem.”

Blood in Stool or Vomit

GI bleeding is not normal and needs to be evaluated.

“Anyone experiencing blood in the stool or blood in vomit needs to be formally evaluated,” explains Dr. Rashid.

“At Penn, we perform procedures like endoscopy, colonoscopy in order to evaluate and diagnose GI bleeding,” says Dr. Rashid. “We also use capsule endoscopy, which uses an encapsulated camera to view the GI tract.”

There are many different causes of GI bleeding including:

Women who notice a change in bowel habits should seek evaluation.

“If you are passing less frequent stools than you were, or if you have diarrhea that lasts longer than two weeks, you should be evaluated by your health care provider,”says Dr. Rashid. “Diarrhea can be a symptom of something simple like a change in medications or an infection, or more complex like celiac disease or inflammatory bowel disease.”

When it comes to constipation, what is normal?

“The answer depends,” says Dr. Rashid. “You know your body the best.There is no rule that states you must have a bowel movement once a day, but if you notice you are going a lot less frequently than you are used to, you should see a physician.”

With the widespread use of over-the-counter heartburn medications, many women are used to self-medicating and may not know where to draw the line.

“Over-the-counter medications are okay, but if symptoms are not getting better in a few days, you should seek medical attention,” says Dr. Rashid. “Long-standing heartburn can be a symptom of something more serious. For example, if the cause of your heartburn is acid reflux, not treating it soon may cause other problems down the road.”

“It’s also important to understand that prolonged uses of some over-the-counter medications can have certain side effects, including the possible increased risk of bone fractures,” adds Dr. Rashid.

General guideline — if you are experiencing frequent heartburn, see your doctor.

If you have problems coordinating your swallowing, difficulty getting food from your mouth down your esophagus, or you feel like food keeps getting stuck in your chest, it’s important to consult with a physician.

“Difficulty swallowing or getting food through the esophagus into the stomach can mean  there is an inflammation or some sort of narrowing or blockage within the esophagus,” says Dr. Rashid. “An upper endoscopy or a barium esophagram can be done to see what is going on. Also, Penn offers swallow studies, which are useful for patients who have problems with their swallowing.”

When most people think of anemia, or low iron in the blood, the first thing that may come to mind is diet. While having a balanced diet rich in iron can help raise low iron levels in the blood, there may be other causes of iron deficiency.

“Women experiencing frequent and/or heavy menstruation may develop anemia,” says Dr. Rashid. “But anemia can also be a symptom of bleeding or malabsorption within the GI tract.” In other words, even adjustments to one’s diet may not have an effect if the body is losing blood or isn’t absorbing the nutrients.

“Symptoms of anemia include feeling tired, dizzy, having heart palpitations, or being short of breath,” says Dr. Rashid. “A blood test can determine if someone is anemic; however, only GI testing can determine if there is a cause within the GI tract.”

Dr. Rashid says a multidisciplinary approach to care at Penn means patients benefit from the expertise of all specialties within the health system. Patients have access to radiology services, pharmacy, and laboratory testing on site at Radnor. “Women who come to Penn have access to nationally recognized leaders not only in gastroenterology, but in all specialties,” she says. “We all work together, which means more comprehensive care under one roof.”

YouTube video link: GI Patients Moving to Adult Healthcare – When Do I Have to Switch to Adult Care

Congratulations to all the Philadelphia’s 2016 Women of Distinction Award Winners!

Great event.. I am honored to be among this great group of women who are being recognized for their notable contributions within our community. 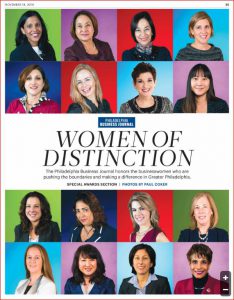 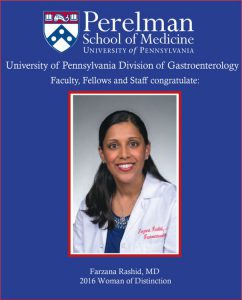 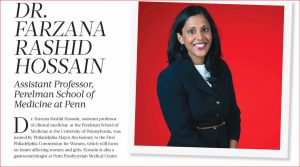